Groups, Ghettos and the Mega Church 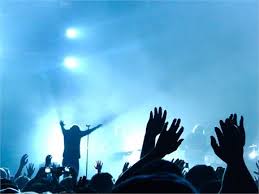 
11 April 2016 (Mint Hill, NC)  The so-called "Mega Church" movement is accelerating here in America.  What appears to be growth, strength and progress is in reality, shrinkage, weakness and decline.  It is no more than a modern day version of "circling the wagons."

We live on a "different planet" that that which I grew up on.  "Back in the day," what was characterized as "church growth" was individual, sacrificial and organic.  Instead of "seeking out a church home" that would cater to one's own narcissism, people would jump at the chance to build something from the ground up to serve the needs of others.  Individuals would work to build a congregation by sacrificing their own wants, wishes and expectations for the sake of others.  These were the days when there was no need to call for "volunteers," the work would have to be shared because there were always more of the "willing" than could be accommodated.  In other words, there were growing churches with deep benches as opposed to swelling churches with nearly everyone "sitting in the recliners."  Worship was a very public participatory event and not a time when one would privately view "professionals" do it all.  In short, the church of yesterday was a place of service.  The "mega church" of today, however, is a place to be "served."

What has changed?  A number of things but primarily just three.  First of all, people today no longer see themselves as the sinners that they are.  Its society that needs changing not individuals.  Secondly, only accomplished professionals should preach, teach and lead in worship.  This false humility has led to only those with extreme talent being allowed to "perform."  Finally, the one change that has led more to the so-called "mega church" movement than the previous two is that people no longer identify as individuals, they identify themselves as part of a "group."  (By the way..."groups" aren't as guilty sin as much as individuals are!)  Not only groups per se but groups that deserve to have "church" catered to them in a very precise and targeted way.

Whereas individuals see deficiencies as challenges to be overcome, groups see deficiencies as evidence of discrimination...the kind of discrimination that demands special treatment in repreation.  This change has come about as society has come to elevate opinion, toleration and diversity as somehow being virtuous.  No longer do people look to the "good of others," they demand to "have it their way."  This, of course, leads to a very "mobile church."  A mobile church is one that is made up of extremely sensitive people threatening continually to leave.  Should their ever changing "felt needs" be not catered to, they're gone to the next "retail outlet."  Not only do they demand that their "felt needs" be catered to, they demand that they be catered to in an ever increasing upward way, "continuous improvement" if you please.  If you "bring them in with hamburger, you'll have to keep them with steak!"

Churches used to have events a number of times a year.  These events, such as outings, picnics, fellowships, etc. were always for EVERYONE.  From the tiny infant to the most elderly, everyone came, no one was left out and no one was catered too.  "God is no respecter of persons" and neither was the church.  Today, people afflicted with what we will call "groupism" would be insulted if they were invited to an event that did not reflect their own perceived demographic preference.  Just look at where we've come!  There's "Kids Church," "Pre - Teens," "Teens," "College Age," "Young Professionals," "Families With Children," "Singles," "Divorced," "Empty Nesters," "Senior Saints" and the list just keeps expanding!  Of course the most damning "groupism" is that which is institutionally imposed upon many congregations by their own elderships.  Many formerly faithful congregations have been purposely divided into the "instrument" and the "non-instrument" factions. As displeased as God is with divisions that "just happen," how much more is He displeased when His own shepherds divide the flock on purpose?  Each group demands, not only their own separate activities, often they demand their own "paid professional" to continually pander to their ever increasing selfishness. Individuals serving others makes a congregation of God's people.  A collection of self serving groups is nothing more than the world gathered under the roof of a building.  The "mega church" movement is the Balkinization of God's people.

So...what does this look like in reality?  It DOESN'T look like that for which Christ prayed for in the garden; "...may they all be one in Me as I am in Thee."  It looks, instead, like that which Paul so strongly taught against to the Corinthians and the Galatians!   "...let there be no divisions among you but..be united in the same mind and the same judgement." ((I Corinthians 1.10b)  "...If anyone is preaching to you a gospel contrary to the one you received, let him be accursed."  (Galatians 1.9b)

Here's the bottom line...when congregations Balkanize themselves along the lines of demographics and preferences, they create spiritual ghettos within the church.  Ghettos, by definition, are cut off from the rest of the world - AND THEN THEY DIE.  Whether the ghettoization is forced from the outside or is a result of the desire of the group inside...the end result is the same.  The Mega Church is killing off the Body of Christ one ghetto at a time.

Let us return to the "old paths."  Let us serve others as did Christ and rebury the old man of sin and selfishness.