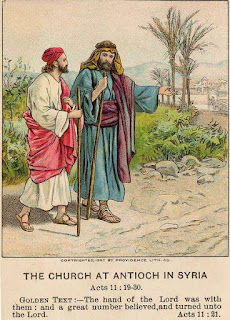 A number of years ago I read a book entitled The Purpose Driven Church.  It was essentially a sales training manual for people in the church business.  The PDC is a retelling  of a church-growth movement many refer to as "felt needs evangelism"  - find a person with a need, fill that need, and then share the gospel with them, they will be far more responsive...or so it is claimed.  It's an approach that "appears" to be working in the United States.  The religious landscape today is dominated by so-called emerging churches, so called mega-churches. and so-called progressive churches.

The "felt needs" programs of the 1970's, 80's and 90's centered upon what was then called "family friendly" Christianity, most notably customized youth programs, community targeted bus programs, and catered senior activities.  It was all very "plug and play," just show up and plug in your kids here, plug in grandad and gramma there, and find your own plug for yourself!  When you're done, unplug everyone and head on home.  There were as many "small groups" as one could imagine where one could experiment with their ever changing "plug and play" desires!

Today, "felt needs" are no long family or even group centric.  They are individual centric.  "What's in it for me?" is the underlying current among todays "seekers."  "Felt needs" today focus on a repentless desire to be "accepted" regardless of one's sinful state.  "Coffee bars" entertain those who "tag along" but don't really want to engage in anything "Christian."

Several years ago in Charlotte, one emerging church offered a cigar bar out in the parking lot on Father's Day!

People today want "high energy" worship full of visual and auditory stimulation.  Today's "seeker" is not seeking God, he is seeking an emotional experience with the God of his imagination.  Today's "seeker" is longing for something he calls "relevance."  He's a consumer of religious goods and services, those things that will make him more successful, wealthier, admired and personally valuable in his community.

There was no "felt needs" church growth in the 1st century

There IS, however, a church growth pattern in the New Testament. It is found in Acts, chapter 11.19 - 21 regarding the church of Christ in Antioch, Syria.

1. Find a place no one else is interested in doing a church plant.
2.

More Blessed than the Apostles? - In One Way...YES!

I – Luke’s Testimony – Do you believe in angels?

a. Hearing is believing
b. Admiral Cochrane
• “Besides 9/11, the only other attack by an outside force on Washington, D.C. was in 1814 when Adm. George Cockburn of the British Royal Navy, literally walked into the White House, at Pres. James Madison’s dinner, drank his wine, and then sat fire to the place.”  DID YOU BELIEVE WHAT YOU HEARD OR NOT?

II – Luke’s Testimony – Do you believe in the virgin pregnancy?

a. Hearing is believing
b. Edwin Booth
• “Months before his assassination, Abraham Lincoln’s son Robert fell from a train platform in Jersey City.  The hand that pulled him to safety belonged to Edwin Booth, brother of John Wilkes Booth (Lincoln’s killer).”  DO YOU BELIEVE WHAT YOU HEARD OR NOT?

III – Luke’s Testimony – Do you believe in the eternal reign?

a. Hearing is believing
b. The Polish impostor
• “After a Polish impostor who claimed the throne of Russia was found out, he was executed, burned and had his ashes shot out of a cannon back toward Poland.”  DO YOU BELIEVE WHAT YOU JUST HEARD OR NOT?