Of Worship and Darwin 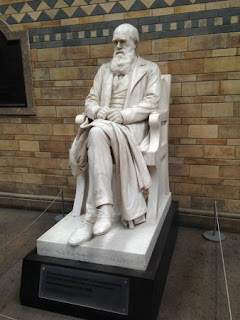 Mint Hill, NC (25 March 2014)  Charles Darwin has achieved near god like status in England.  There is an impressive "church like" museum there to his "honor." (See illustration above)  We would be hard pressed to name even a single person that has shaped western civilization more than he in the last 200 years.  Darwin is "remembered" as a naturalist, scientist and discoverer by our revisionist educators and media.  His real legacy, nearly universally ignored, is far darker and sinister.   In truth his legacy is racism, war and progressive-ism.

Few remember or recall the full title of his now infamous book touted to our school children.

Darwin is a hero in England for his racist ideas propelled and legitimized the brutal expansion of Her Majesty's Empire in the 19th century...i.e. the English are superior to all the rest of us "not so quite evolved" races of people elsewhere.  Not only was "queen and country" free to do whatever to whomever, it was "right" for her to do so.  For Darwin, the only "right" was the power whiled by the so-called "fittest."  Darwin enabled England to impose her "racially superior" will from Ireland to India until the mid 20th century.  In his new and impressive work, The Immortal Irishman, Timothy Egan depicts this Darwinian philosophy as imposed by England on Ireland in the 19th century:

For the better part of seven centuries, to be Irish in Ireland was to live in a land not your own.  You called a lake next to your family home by one name, and the occupiers gave it another...You could not enter a court of law as anything but a criminal or a snitch.  You could not worship your God, in a church open to the public, without risking prison or public flogging.  You could not attend school, at any level, even at home...You could not marry, conduct trade or go into business with a Christian Protestant...You could not own a horse worth more that 5 pounds sterling...You could not speak your language outside your home.  You would not think in Irish, so the logic went, if you were not allowed to speak Irish...What had the Irish done to deserve these cruelties?  They had refused to become English.(1)

No man's teaching in the last 200 years has been so devastating and damnable as Charles Darwin.