On Sunday evening, April 2, 2017, Greg Wanderman, gospel preacher for the Clover (SC) church of Christ spoke at the Archdale church of Christ, 2525 Archdale Drive, Charlotte, NC 28210 during the worship hour.

He very admirably spoke on the subject; "Finding Love in Leviticus."  Though many wrongly assume that the God of the Old Testament is an angry tyrant, Greg pointed out with proof after proof from the text that quite the opposite is true.  He showed that the eastern gate of the Tabernacle (the tent of meeting) was the only entry to the abode of God Himself as Christ is the only "true door."  He noted that the show bread reminds us that Christ is the bread of life.  It was illustrated that the candles are symbolic for the fact that Christ is the light of the world.  The brazen sea was used for the priest to ritually cleanse themselves before serving in the Tabernacle as Christ commands baptism in water for the remission of sins. The prayers of the saints are symbolized by the incense of the temple.  In both the Tabernacle and in baptism, atonement is made by the shedding of blood to blot out sin.  Mercy is extended to the poor as two measures of flour would substitute for a pigeon should one be too poor to possess one.   The flour would be poured by the priest onto the burning sacrifice of a bloody sacrifice thus combining the blood going up in smoke with the powdery flour.

No, far from being the "God of Wrath," there is nothing but love to be found in Leviticus because above all else, God wants to Tabernacle with us, now and forever.

Thanks, Greg, for a job well done as God gets all the glory for "loving us while we were yet sinners."
at April 02, 2017 No comments:

He Began to Speak to Them in Parables - Part 1

“He Began to Speak to Them in Parables”

“From Ulster Plantation to the Carolina’s with the Gospel!” * 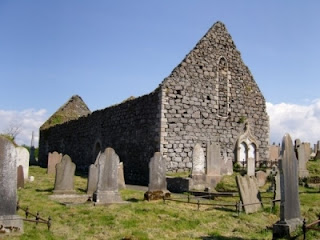 Text: Mark 12.1 - 12
Thesis:  In order to rightly divide the Scriptures we must understand how language is used in Scripture.

A.   If we ignore how language is used in the Scriptures, we will not have “ears to hear.”
B.   Peter refers to the misunderstanding of the language of Scripture, either done ignorantly or on purpose, as “twisting.” – II Peter 3.15 - 16

A.   At the heart of every error lies a misunderstanding of how language is used in the Bible.
B.   IN ORDER TO RIGHTLY DIVIDE THE SCRIPTURES WE MUST UNDERSTAND HOW LANGUAGE IS USED IN THE SCRIPTURES.
C.    “Why?”
D.   Luke 12.9 – “What will the owner of the vineyard do?”

·         My fifth great uncle was Hugh Gaston who was rector at the Ballywillan Presbyterian Church (pictured above left) in County Antrim, Ulster Plantation (Northern Ireland) and wrote the most dangerous book of his time; Gaston’s Collections.  It allowed “the ploughman to know more Bible than his clergyman.”  Hugh fled to South Carolina where he died prematurely of the measles.  He is buried just one hour south of Charlotte in Chester County, S.C. in “Burnt Meeting House Cemetery.”   Uncle Hugh continues to inspire my ministry to this very day.  You can read more about Uncle Hugh here: http://www.ballywillanpci.org/rev-hugh-gaston
Ruins photo courtesy of: ballywillanpci.org.