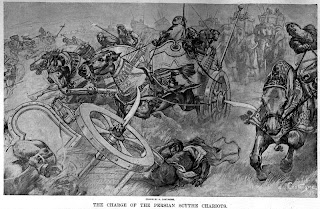 We live in retail times.  Everything is for sale, including religion.  The 12th century Roman Catholic monk, Thomas Aquinas, taught that one's primary access to God was one's own senses - including, according to Thomas, one's own imagination!  How American!  "If you can dream it, you can make it reality!"  We might call this approach, "Popular Religion."   In these days of American jobs being shipped overseas, "popular religion" is one of the last things manufactured here in the states...and boy do we turn out the product!  The message of "popular religion?"  "Come just as I am and leave just as I am!"  No repentance, no confession, no acknowledgement, no baptism, no changed life...God just pats me on the head and tells me "you're o. k., you're not as evil as all those other people!"

The most "popular" church in America today is Joel Osteen's "Lakewood Church" in Houston, TX.  Lakewood boasts a membership of just north of 43,000 people![1]  Just how popular is Joel Osteen?  Popular enough to "put the show on the road!"  People are so wanting to hear Joel's "popular religion" of no change and no obligation that they are willing to pay big bucks just to hear it!  Here’s an advertisement on ticketsnow.com:

Charismatic Lakewood Church pastor and best selling author Joel Osteen is sharing his message with capacity crowds at arenas across the nation.  Fans drive in droves to see Joel Osteen and hear his popular sermons!  Join one of the most famous televangelists for a special night of encouragement, inspiration, and worship!  Buy your Joel Osteen tickets now!(2)

But...what does GOD think of "popular religion?"  Does He endorse it?  Does He accept it?  More importantly, will it SAVE you?  Paul says that "the things written aforetime were written for our learning."  (Romans 15:4)  One of those "aforetimes writings" takes place in I Kings 22 where we get an insight as to the validity of "popular religion" with God.

Due to an un-scriptural marriage (I Kings 8:18) between Judah's King Jehosophat's son, Jehoram, with the daughter, Athalia,  of the pagan queen of Israel, Queen Jezebel, and her lap-dog husband, King Ahab, Jehosophat found himself in a military pact with evil.  This obligated Jehosophat to militarily support whatever military adventure Ahab could dream up.  "I am as you are, my people as your people, my horses as your horses." (22:4b ESV)  Thus the two kings decided to attack the Syrians at Ramoth-Gilead.

King Jehosophat, being skeptical of that old fox Ahab, in 22:5; "Inquire first for the word of the Lord."  He wanted God's stamp of approval before he and Ahab started a war.  Ahab, being the pragmatist that he was, was actively seeking a way to fend off such pesky requests.

We think "opinion polls" are new but King Ahab knew all about them.  Not only that, he knew how to manipulate them!  (Imagine, politicians manipulating polling data?!)   In 22:6, the Bible says, that Ahab took an "opinion poll" of "about 400 men" who (here’s a shocker!) ALL told the king that he would succeed!  They universally proclaimed to the king, "Go up, for the Lord will give it into the hand of the king."

This is "popular religion" at it's best, or should we say, at it's worst!  We can almost hear the people say, "Tell the king what he wants to hear and all will go well with you!"  They claimed to be speaking for God (22:11) but Jehosophat was still skeptical!  "Is there not here another prophet of the LORD of whom we may inquire?"  Finally, the reluctant Ahab fesses up!  "There is yet on man by whom we may inquire of the LORD, Micaiah the son of Imlah, but I hate him, for he never prophesies good concerning me, but evil." (22:8. emphasis mine - RM)  You reckon!?  No wonder Ahab did not include him in the first batch!  He knew what was the likely prophesy to come out of all of this!

As it turns out, the 400 "prophets" were wrong and the lone Micaiah was right!  The combined army of Ahab and Jehosophat was to be defeated by the Syrians.  Not only that, the evil Ahab was killed at Ramoth-Gilead and Jehosophat barely escaped with his life to rule over a devastated and ruined country.  "Popular religion" did not fly on that day nor will it in our day!   Every Sunday in Charlotte, 400 +/- denominational preachers tell their listeners to say the "sinners prayer and receive Christ as their personal savior."[3]  They tell people what they want to hear while entertaining them with instrumental music, art, dance and drama...all without a "word from the LORD!"  What was it that Paul told the Galatians?  "But though we or an angel from heaven, preach any other gospel unto you than that which we have preached to you, let him be accursed." (Galatians 1:8 (KJV)  "Popular Religion" IS "another gospel!"  It is accursed!

Yes, King Ahab died for his embrace of "popular religion" and will face God one day in judgment still clutching onto it.  WILL YOU?