I'm Not O.K. and Neither are You! (Without Christ) 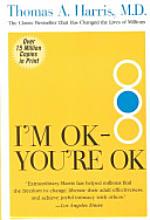 When  I attended Oklahoma Christian College back in the early 70's General Psychology was required course for my field of study.  One of the required books to read for that course was the blockbuster seller of the time; I'm O.K - You're O.K. by Dr. Thomas A. Harris.  The books quotes Jesus so it had to be correct, didn't it?  Sadly no.  None of us are o.k.  "IF" we were all "o.k." why did Jesus have to die for us all?  Comparative "goodness" is no good.  For example; taking Hitler and Stalin, who was the "better" man?  Or, between Mussolini and Napoleon, who was less "righteous?"  Harris' "transactional analysis" had the effect, whether intended or not, to make one feel good about themselves while in their sinful (and damned) spiritual condition.  It was, and is, a wildly popular idea.  If anything is needed today, it's this....I'm not o.k. and neither are you without Christ.

We are not asserting opinion here.  We are not impugning Dr. Harris' professional qualifications.  None of that matters.  What we are doing is calling on God's Word to tell us just what our real condition is without Christ.  Anyone old enough to know the difference between right and wrong, that has not repented of all their sins, confessed the Name of Christ before witnesses and been baptized for remission of sins in the Name of Jesus Christ is NOT o.k.  However, those who have, very much are!  NOT on the basis on their own merits, but by virtue of being "in Christ."  He is the ONLY man ever to live that was "O.K."  Paul tells us in Romans 3.10 -18 just what man's true condition is without Christ:


- None is righteous, no not one
- No one understands
- No one seeks for God
- All have turned aside
- Together (all) have become worthless
- No one does good, not even one
- Their (everyone) throat is an open grave
- They use their tongues to deceive
- The venom of (snakes) is under thier lips
- Their mouth is full of curses and bitterness
- Their feet are swift to shed blood
- In their paths are ruin and misery
- The way of peace they have not known
- There is no fear of God before their eyes

On May 8 North Carolinian's will vote on Proposition One:

“Marriage between one man and one woman is the only domestic legal union that shall be valid or recognized in this State.”

If I listen to two former Charlotte mayors, Harvey Ghant (D) and Richard Vinroot (R), I will likely vote against Prop 1.  Why?  Because these two men consider any prohibition of homosexual marriage to be little more than hatred, discrimination and bigotry.  Their views are sadly predictable.  Life long politicians follow the path to money and votes.  All other considerations aside, the homosexual demographic has plenty of both.  Sadly, both parties are anxious to get their money and their votes.  These two lifetime professional politicians have teamed up to make a television commercial in order to suppress the pro Prop One vote. They do so by insinuating that anyone so voting is uneducated, narrow-minded, intolerant, bigoted and hateful for wanting to deny the "right" to marriage to two people of the same sex who want to be married.

On the other hand, if I listen to Jesus Christ, I will assuredly vote FOR the proposition.  In Matthew 19 Jesus makes very clear that God blesses sexual union ONLY between one man and one woman for life with two exceptions - death and adultery.  All other sexual unions are, therefore, outside of God's Will.  This would include ALL forms of immorality, including but not limited to, fornication, adultery, incest, bestiality et. al.  "From the beginning" God made the familial model of one man with one woman for life with children the basic building block of society.  Our Founding Fathers understood this.  John Adams, signer of the Declaration and our 2nd president, said; "Our form of government is for a moral and religious people and none other."  To discard this marital model is to invite chaos and destruction to the Republic.

We all have a blessing, opportunity and an obligation to vote FOR Proposition One on May 8.  This is not a political issue though it is debated in the political arena.  It is not a Democratic Party or a Republican Party issue for both parties are both pandering to immorality.  It IS an opportunity to "proclaim liberty throughout the land" for morality, marriage and fidelity protect and enhance all other freedoms - freedoms given to us by God and not by man as stated in the Declaration.

As for me and my house, I will vote for righteousness on May 8 though many may "call" me a bigot.

All over our fair city one is finding advertisements for many “holy week” observances such as “Good Friday” and “Easter Sunrise Services.”  We must, therefore, ask the question; “Are these celebrations biblical?”  Did Jesus and His Apostles command such celebrations?  Did the Apostles celebrate these things themselves?  Did they even infer that such celebrations were allowed?  The answer is a resounding, NO!


From Matthew to Revelation we find nary a trace of anything called “Holy Week.”  To add such celebrations to the Holy Scripture would be presumptuous, arrogant and wrong.  How, then, did the several observances of “Holy Week” come into being?  The so-called “Holy Week” has six components:


What do all of these celebrations have in common?  They are all Roman Catholic in origin and have “meanings” that are allegorically assigned.   Allegorical interpretive methods were adopted by the apostate church beginning in the 2nd century based most notably upon the teachings of the so-called “church father,” Origen.  Origen taught that all Scripture has multiple meanings and each individual can interpret the Scripture based upon their own individual experiences, understandings and stories.  The RCC then began to assign “meanings” to Scripture erroneously (in error.)  Strangely, even the Catholic Encyclopedia admits that these celebrations were unknown in the first century:


…there seems much to suggest that the Church in the Apostolic Age designed to commemorate the Resurrection of Christ, not by an annual, but by a weekly celebration.[1]
Here is a short history of these allegorical additions to God’s complete Will…“the faith which was once delivered unto the saints.”  -  Jude 3 (KJV):
1)   ASH WEDNESDAY – Ash Wednesday is the beginning of the 40 days of Lent.  The name comes from the practice of taking the ashes from the previous years burnt palm leaves form “Palm Sunday” and spreading them on the foreheads of parishioners in the form of a cross.  This is said to be representative of “mourning and repentance.”  This supposedly prepares the adherents for the 40 days of Lent following. Historically, Ash Wednesday was first celebrated annually beginning around the year 960.
2)   LENT – The word “Lent” is from the old English word lencten which means to “lengthen” and was used to describe the longer days of the spring season.  The time span of “Lent” was totally allegorical and imaginative.  It was based upon the fact that Jesus spent 40 days in the wilderness as He prepared for His temptation.  Other allegorical assignments were also made:
The duration of the season of Lent is based on the ancient church custom of requiring catechumens to undergo a forty-day period of doctrinal instruction and fasting before being baptized on the evening before Easter.  This probationary period was called the quarantine (from the Latin word for forty). [2]


The annual celebration of Lent dates to the mid 5th century and is noted by several church historians of that time; Leo, Socrates and Jerome.


3)   PALM SUNDAY – Palm Sunday was never celebrated in the apostolic era and apparently not annually celebrated until the 6th century at the very earliest.[3]


4)   MAUNDY THURSDAY – Thursday is the traditional day of the Lord’s Supper.  “Maunday” comes from the Latin term mandatum novum, meaning new commandment.  It is also known as “Holy Thursday” or “Green Thursday.”


Zelený čtvrtek (Green Thursday) is how the Czechs and Moravians refer to Maundy Thursday. One explanation is that in many places, before the thirteenth century, green vestments were used for the Mass that day. Another is that this is a reference to "the Green Ones," the penitents who, being re-admitted to the Church, wore sprigs of green herbs to express their joy.


5)   GOOD FRIDAY – The annual celebration of both Good Friday and Easter date to, at the earliest, the 2nd century A.D.  Though unknown in the 1st century, these two festivals were the earliest of practiced “Holy Week” observances from a historical standpoint.


6)   EASTER – The word “Easter” comes from the old Anglo-Saxon word, eostre.  The word generally came to refer to the “spring season.”  It has clear pagan overtones since the word was the name for the so-called goddess of spring:


This mythical figure is said to have been the goddess of the sunrise and the spring. She is the Teutonic goddess of the dawn. The direction of the sunrise, East, is named for her. In Norse mythology, the name is spelled Eostare. Another considered the Norse/Saxon goddess of spring is Ostara. Eastre is believed to be an ancient word for spring.[4]


Any and all “Holy Week” celebrations are at best extra-biblical and at worst un-biblical.  They are all allegorical, presumptuous and self centered.  They were created by men for men and do not glorify God in any way, shape, matter or form.  We were called, not to “Holy Week” but to holy living!  We celebrate the death, burial and resurrection of Jesus Christ EVERY Lord’s Day during the Lord’s Supper and not during an annual celebration of so-called “Holy Week.”  For a biblical perspective, read I Corinthians 11.