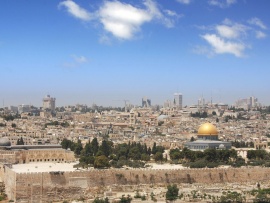 Jerusalem as seen from the Mount of Olives[1]

A burning question, it seems, for our times.  Do we live in the “end times” or the “end of time?”  Do we live in the days of Christ’s judgmental return or are we simply living during the last spiritual age?  Despite the denominational rhetoric to the contrary, the Bible answer is the latter, God has truly initiated the very last spiritual age in the history of the world – the Christian Age.  It began with the death, burial and resurrection of Jesus Christ whose will was read on the Day of Pentecost, fifty days following the crucifixion of Christ.  These “last days” will linger until the “last trumpet” has sounded.  How long will these “last days” extend?  No one knows.  We do know, however, what Christ told his disciples about how they (and by extension you and me) should view these questions and how to set their priorities accordingly.

Matthew 24 is very clear about two things; the absolute predictability of the destruction of the Temple in 70 A.D. and the absolute un-certainty of the timing of the judgmental return of Christ – the very last day.  This passages clarity, however, has been clouded by many overlays of preconceived falsehoods in recent years by those who would distort the very words of Christ.  It is our purpose to reexamine the text for what it says, not what many would like it to say.

Matthew 24 begins with the awe the disciples had for the magnificence of the Herodian Temple.  It was one of the most beautiful structures in all the 1st century world.  They were so enthralled with its stunning beauty that they made an overt effort to point it out to Jesus.  How Jesus responded must have shocked the disciples to the core.  He told them that this “wonder of the world” would be destroyed to such an extent that literally “not one stone would be left upon another!” They left the Temple, walked down into the Kidron Valley and walked up the slope of the Mount of Olives.  Looking back, one could clearly see Mount Zion and the Temple which set atop it.  It must have been quite the scene.

The shock of the disciples at Jesus’ reply was so profound that the disciples did not speak about it again until the end of the journey from the top of Mt. Zion to the top of the Mount of Olives.  Jesus was sitting on the Mount of Olives and the disciples, still stunned, came to Him with two questions; “When will these things be?” and “What will be the signs of Your coming and the end of the world?”  Jesus will give them two very different answers, one complete with every detail and the other with absolutely no detail at all.
It is difficult, if not impossible, to fully appreciate what the Temple meant to the 1st century Jew.  It not only was the place of national worship and the very presence of the Spirit of God, it was literally part and parcel of their spiritual and national identity as a people.  Without the Temple, there would be no nation.  Without the Temple, there would be no sacrificial system.  Without the Temple they would no longer be a people.  In their minds, without the Temple there would be no God!  Any loss of the Temple would be like…the end of the world itself.  Without the Temple, how could life go on?  That is why the two questions were linked in their mind for “if” there was no Temple there would be no place for the Spirit of God to reside.  “If” God’s Spirit was no longer on earth, how could earth itself survive?  If the Temple were to be destroyed, how could life continue?  Over time, sadly, the faith of the Jewish people had moved…without notice…from faith in God to faith in God’s residence.  One is reminded of that old song by Leslie Gore; “…don’t they know it’s the end of the world?  It ended when I lost your love.” – TO BE CONTINUED

[1] Photo Courtesy of: http://www.photos8.com/the_old_city_of_jerusalem-wallpapers.html  The extant “Dome of the Rock” is the approx. location of the Herodian Temple.
at August 31, 2011 No comments: