“Reflection, Acceptance and Deliverance”
From Ulster Plantation to the Carolina’s with the Gospel!” * 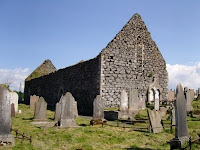 Text: Mark 7.24 - 30
Thesis: What at first appears harsh may just be Grace in disguise!

A. He did not come to the District to minister but to rest
B. He did not want anyone to know he was there but he was being followed.
C. JESUS COULD NOT BE HIDDEN!
D. Her seeking Him out was an act of desperation, women did not act in this way in this culture.
E. This woman is the ultimate outcast in her extant circumstances
1. Female
2. Greek
3. Syrian
4. Phoenician
5. Canaanite
6. Un-invited
7. Nuisance to others

A.  Many a skeptic takes this passage to “prove” that Jesus uses racial profiling and makes racist assertions.
B.  Not so!  The word translated “dogs” is the original kunaria which literally means “puppies.”
1. In New Testament times there were some good and some bad references to dogs.
2. Packs of wild dogs were prevalent.  They were visous and a real threat to people who had to protect themselves.  Such a pack licked up Jezebel’s blood in the street.
3. However, dogs were domesticated and valuable to the shepherd.
4. Finally, as in this passage, puppies were often allowed in the home as a way to keep the floor clean during and after meals and were sort of quasit pets for the children.
C.  Jesus is not racial profiling here, He is noting that fact that the Gospel is to be spread first to the House of Israel before is spread to the Gentiles.
D. He is NOT equating Gentiles with dogs, He simply asserts the plan of God to offer salvation first to the Jew.
E.  Refusing to take offence, the woman gladly accepts the premise and is grateful to accept the “crumbs of healing” from the Savior.

A.   The woman’s faith and acceptance of the message is rewarded
B. Jesus commends her
C. The daughter is healed

A.  Jesus sets His evangelistic priorities
B.  Jews first
C.  Gentiles second
D. Everyone eventually
E. That which first appears harsh may just be Grace in disguise!

A. There is no district to which Jesus won’t go
B. Jesus is in your district
C. Who or what you are is no concern for Jesus
D. Crying to Jesus about our demons is a good thing
1. A broken and contrite heart
E. We are the puppies and He’s still spreading the Gospel to us

·         My fifth great uncle was Hugh Gaston who was rector at the Ballywillan Presbyterian Church (pictured above left) in County Antrim, Ulster Plantation (Northern Ireland) and wrote the most dangerous book of his time; Gaston’s Collections.  It allowed “the ploughman to know more Bible than his clergyman.”  Hugh fled to South Carolina where he died prematurely of the measles.  He is buried just one hour south of Charlotte in Chester County, S.C. in “Burnt Meeting House Cemetery.”   Uncle Hugh continues to inspire my ministry to this very day.  You can read more about Uncle Hugh here: http://www.ballywillanpci.org/rev-hugh-gaston
Ruins photo courtesy of: ballywillanpci.org.