Faith In The Valley 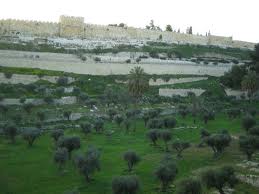 We often think of faith as a "mountain top experience." Such a statement is only half true for if one is to find the mountaintop one must begin the journey in the valley. The mountaintop is possible ONLY if faith is found in the valley first!
King David found his faith in the valley of Kidron before ascending to the Mount of Olives in II Samuel 15:13 - 37. He entered the valley upon hearing that his rebellious son, Absalom, "had stolen the hearts of the men of Israel." [15:13] He entered the valley because he listened to men instead of inquiring of God. His faith was replaced by fear...fear of "being overtaken," fear of being "brought down to ruin" and fear of having "Jerusalem put to the sword." [15:14] Though no attack was imminent, no army was approaching and no confirmation of the strength of the enemy was received...David fled Zion and headed to the valley. As so often is the case with us as well, David did not descend into the valley alone, he took others with him. In fact "all his household (went) after him." [15:16]
When David and his household descended into the deepest part of the valley something amazing happened. Though his own family, many of his top advisors and apparently most of all Israel had deserted him he found out who his TRUE friends were! David was accompanied, protected and loved by real friends who were not even of the House of Israel! His BEST FRIENDS turned out to be a wild and tough bunch of Philistines! Who stood between David and Absalom? The Cherethites, the Pelethites and the Gittites from Gath! Chief among them was a fugitive from Gath, Ittai. Having come over to David just ONE DAY BEFORE, he was a true friend of the king! Ittai told the suffering king; "As the Lord lives, and as my lord the king lives, wherever my lord the king shall be, whether for LIFE or DEATH, there also will your servant be." [15:21] Before faith returned to David, God showed him who his real friends were. Drawing close to God often means first drawing close to one another. We see the "face of Jesus" in our real and true friends when we are in the valley of doubt and fear.
As with us, when David got to the bottom of the valley, he encountered God who was already there. God lives in the valley so He can meet us there, take our hand and lead us home. Some other true friends, Abiathar, Zadok and ALL the Levites were there bearing the Ark of the Covenant - the very presence of God Almighty! When David met God in the valley, everything began to change! Faith began to return! He gained strength to climb the Mount of Olives where his restoration to the throne began! There was, of course, a great temptation to take the Ark along with them to "ensure" God's protection against their enemies. David, though, refused. He ordered the Ark back to Zion in a great act of returning faith. He, right then and there in the deepest part of the valley, put his faith in God and not in the Ark. His faith had returned and he then began to act out this new found faith in focus, courage and determination.
Though we, too, may find faith in the valley...much sorrow remains as we walk up towards the mountaintop. David himself said that what God desires is a "broken and contrite heart" before Him. [Psalms 51:17] We see a broken and contrite David - leading a band of broken and contrite followers - up the Mount of Olives. Repentance is a tearful walk but is part and parcel of any return to faith as we leave the valley of doubt and despair. "But David went up the ascent of the Mount of Olives, weeping as he went, barefoot and with his head covered. And all the people who were with him covered their heads, and they went up, weeping as they went." [15:30]
As David approached the summit, God gave him a great blessing and comforter in a special friend - Hushai. Though the text refers to David's Philistine friends as "servants" [15:18], Hushai is specifically called "friend" in 15:37. Like his other friends, Hushai is NOT a Jew! He is a Canaanite, an Archite from the border of Ephriam and Benjamin. He is, however, a believer! He is servant of the God Most High who approached the summit of the Mount of Olives - "where God was worshipped" - with his "coat torn and dirt on his head" [15:32], Hushai, the "friend" of David, returned to Jerusalem, risking his life, as a spy for the king. As he did with David, God gives us "friends" who risk everything to bring us back to the summit "where God is worshipped!"
David reached mountaintop of faith because he met God in the valley first! In these times of doubt and despair - so can we!
Join us for worship next Lord's Day at 10 a.m. at the Archdale church of Christ, 2525 Archdale Drive, Charlotte, NC 28210!  "Jesus Will Meet You There!"
at August 01, 2011

Email ThisBlogThis!Share to TwitterShare to FacebookShare to Pinterest
Labels: Faith