Will It Be Jude or John? (Calvin That Is!) 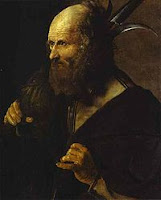 When theologians approach Scripture allegorically such tail-wagging-the-dog conclusions are not only possible, they are inevitable when begging the “lose their salvation” question. The historically great, yet biblically confused reformer, John Calvin, poured the theory that Christians could never become apostate into theological concrete where it remains until today. Many have been deceived by this doctrine during the last 500 years while the truth regarding the matter, revealed by the Holy Spirit in the book of Jude, has been rejected, overlooked and ignored.

In 180 degree opposite reaction to medieval Roman Catholicism, Calvin formed a theological system now named after him, known as Calvinism. Calvinism is summed up in an acronym, “T.U.L.I.P.”

T otal Depravity – all mankind is conceived and born as sinners doomed to hell unless God “elects” them to salvation arbitrarily
U nconditional Election – some of those “totally depraved” are arbitrarily “chosen” (elected) by God for salvation while the rest are arbitrarily “chosen” (elected) for damnation, humans have no free choice
L imited Atonement – The blood of Christ, shed on the cross, is not sufficient to save everyone, just the so-called elect.
I rresistable Grace – those who have been arbitrarily chosen for salvation cannot resist the grace of God, even though they attempt to do so
P erserverance of the Saints – once those who are arbitrarily elected to salvation have been saved, they cannot never become apostate and therefore “lose” their salvation

Time and space will not allow an examination of all these theories, our immediate concern is the last leaf in the flower, as it were, “perseverance of the saints.” Can a Christian become an apostate? Can one who once was saved reject that salvation at a future point in time and re-embrace damnation? Can one who once “walks in the light as He is in the light, re-enter into “everlasting darkness where there is weeping and gnashing of teeth?” Calvin says, “no.” To “prove” this assertion, Calvinists turn to two Scripture references. [“A text without a context is a pretext for a proof text.” – D. A. Carson Sr.] These two “proof texts” are offered up:

Little children, it is the last time: and as ye have heard that antichrist shall come, even now are there many antichrists; whereby we know that it is the last time. They went out from us, but they were not of us; for if they had been of us, they would no doubt have continued with us: but they went out, that they might be made manifest that they were not all of us.
– I John 2:18 – 19

The Calvinist interpretation of these two verses goes like this:

Now if the Scriptures had nothing else to say regarding this matter, the Calvinist would indeed have a leg to stand on. However, the Scripture has much more to say about it. First of all, salvation is conditional to on going faithfulness, repentance and confession of sins. John says the following:

This then is the message which we have heard of him, and declare unto you, that God is light, and in him is no darkness at all. If we say that we have fellowship with him, and walk in darkness, we lie, and do not the truth: But if we walk in the light, as he is in the light, we have fellowship one with another, and the blood of Jesus Christ his Son cleanseth us from all sin. If we say that we have no sin, we deceive ourselves, and the truth is not in us. If we confess our sins, he is faithful and just to forgive us our sins, and to cleanse us from all unrighteousness. If we say that we have not sinned, we make him a liar, and his word is not in us. – I John 1:5 - 10

Having said all the above, some might still cling to Calvin in the false hope that one can “live like hell and still go to heaven.” That is where Jude comes in. The inspired book of Jude gives us not one, not two, not three, not four but FIVE concrete examples of people once saved that consequently became lost when they embraced apostasy. These were not people who were “never really saved,” they were people who were saved by God totally, without question and without a doubt! Here are the five examples and we will rest our case!

One last observation. “IF” Calvin is right and “IF” “once saved always saved” [The Perseverance of the Saints] is a true and wholesome doctrine, then the following also must be true regarding the assertions of Jude:

There we have it. We have a choice to make. Will we choose Calvin over Jude or will we choose Jude over Calvin? Upon that choice our souls depend!